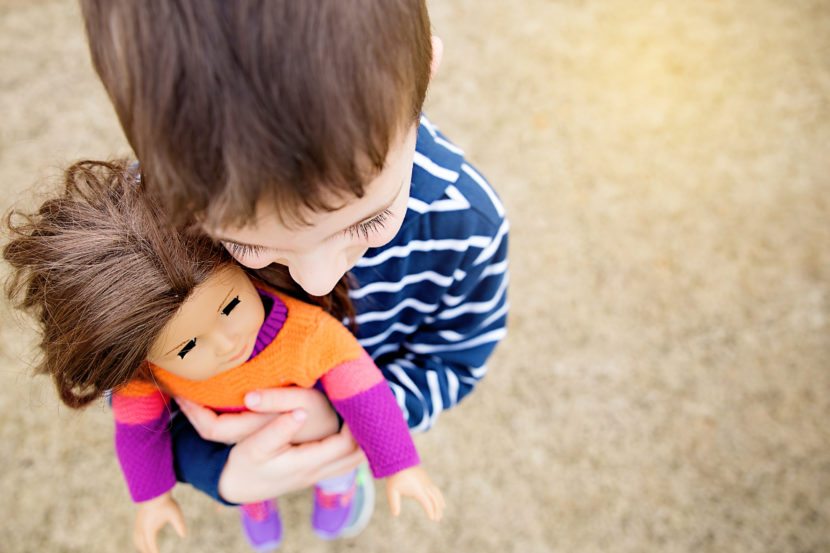 In very recent years, there has been a remarkable change in the way we’ve become aware of how gender stereotypes are having a negative affect on children.

Across all areas of our daily lives, there are shifts to change the view that gender decides what children must wear, play with and become as adults.

As a result, changes are happening. Gender neutral pronouns are used more, such as they/them instead of him/her. Schools are introducing gender neural uniforms. Even gender neutral bathrooms are becoming more common.

However, parents today may be confused or even concerned about what gender neutrality means for their own children.

What Is Gender Neutrality?
Many of us have grown up with the idea that blue is for boys and pink is for girls. Or perhaps girls only like to play with dolls and boys should play with trucks and cars. There’s a gender bias in what children wear. Girls like pink dresses and nail polish, whereas boys should wear pants and never put on makeup.

This is called the gender binary and it is the idea there are only two distinct gender options: male and female.

But Gender Is What We’re Born With…Isn’t It?
Many people use gender and sex interchangeably. However, while they are related, they’re not the same thing.

When a baby is born, we assign the newborn’s sex as either male or female based on the baby’s genitals. This assigned sex is then the child’s presumed gender. For many people, this is rarely an issue. But for others, and indeed for an increasing number of parents, assigned gender is problematic.

We’re bombarded with gender messages from the moment we’re born. These messages are sent through clothes, toys or even activities. Schools might separate sports activities into boy and girl groups. Our families might use language that indicates gender is related to behavior, such as ‘good girl’ and ‘boys will be boys’.

Raising Children In A Gender Neutral World
There are different levels of gender neutral parenting. The basis is to break away from the gender binary and give children with opportunities to explore the world without a gender focus.

Many parents are already doing this by providing children with toys traditionally earmarked for the opposite gender. They may steer away from gendering colours in the child’s home environment, and supporting the way their child chooses to dress or appear. Other parents may choose to allow their child to choose their gender.

Early childhood education services and schools are supporting gender neutrality by providing environments where children are freed from the expectations of their gender. This means toys aren’t separated into gender-specific areas, sport lessons aren’t gender-specific, having gender-neutral bathrooms, and avoiding language which focuses on gender bias.

Is There A Downside To Gender Neutrality?
The breaking down of gender binary norms can have a powerful effect on our social, cultural and political futures.

Research is showing children who are raised with strict gender stereotypes are at increased risk of mental and physical health problems from adolescence. This might sound surprising until we think of how children have been raised in the past. Boys don’t cry. Girls should smile.

Children have been inundated by gender-based stereotypes since babyhood and these messages oppress their individuality. They are forced to grow only one way, rather than being able to access and express their full range of emotions and abilities, becoming individual and healthy adults.

Yet there are those who question how far gender neutrality has gone and will go in terms of creating confusion within young children as to whether they are a boy or a girl.

Raising children in a gender neutral way doesn’t mean enforcing another set of rules that removes a child’s right to individuality. Stripping away the gender prescriptions of toys or clothes doesn’t mean a child has to ‘choose’ to be different from their assigned gender at birth.

If anything, it hands responsibility back to parents to be aware of their child’s individual tastes and personalities, regardless of their sex. We celebrate and enjoy them for the unique person they are and will become over time. By consciously allowing gender to take a back seat, we’re also creating a world which reacts in the same way. And that can only be a good thing.

Sam McCulloch is a freelance content writer and editor, with a special interest in parenting, birth and early education. Sam believes in the importance of building a village so no parent is left behind or feels unsupported. When she’s not writing great content, you can find her trying to keep up with three kids, enjoying the great outdoors or reading a good book.